Have you heard of this; fitspiration? It is kind of a fun and awkward word to say, but apparently it’s a thing.  I was googling quotes and images to collect in an inspiration folder on my desktop for a vision board I want to do later and this word kept coming up.  This word got me to thinking, who or what is my fitspiration...or what if I was someone’s fitspiration??

I have had friends in the past suddenly loose a bunch of weight.  Now, I say suddenly but I am realizing it was a slow brutal process that I only suddenly began noticing the positive physical reaction that was occuring. They changed their entire life around.  Their priorities, their mental state, their diet and nutrition, their activity level… their future suddenly became brighter and full of hope and dreams they never thought were possible.  It was such an inspiration to watch them achieve these goals and continue to make more, reaching even farther than before… each time surprising themselves with their ability to accomplish the challenge at hand.

I made excuses. I had mental lists upon lists that made sense to me at the time, explaining with confidence all the reasons why that process of change worked for them and would NOT work for me.  Somehow I was the exception, somehow I was different and therefore my pity, guilt, anger, disgust and pure laziness kept me from getting up and moving… it kept me from change.

I was frustrated and felt that negative energy following me throughout the day.  I would moan and groan about my clothes not fitting or having gained weight (if I was brave enough to actually look at my scale)… but all the moaning in the world couldnt get me to change my life.  Sure I did occassional 25 minute ‘workouts’ at the YMCA or my 2x/week kickboxing class… but again it was a downhill mental battle with myself that I would loose every time.  If I actually went I was full of complaints and a negative attitude that brought my productivity down. I grumbled through it but failed to embrace the beauty of what my body was trying to tell me.  I needed to exercise…. and I could actually like it!

Right around this time of desperation my friend/coach/fitspiration suggested to the group of inspiring, courageous and strong women that I was working out with on wednesday and friday mornings that we try a 28 day detox using producs from Arbonne Essentials. 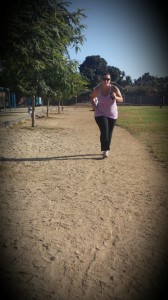 Up to this point I had never dieted or drastically changed my nutrition habits… I simply complained about everything and gave a half-ass attempt at exercise.  That was all I had time for.  That was my best…. or so I told myself over and over again.  I dont know what was different this time, maybe it was the group of women who started this journey with me, maybe it was the inspirational leader of our group, maybe it was just time and I had had enough…. maybe all of the above… but 28 days later I was going strong! I wasn’t cheating on the clean eating program, I was not really doing the detox any more BUT I was exercising and loving it.  My body was full of energy and felt alive. I wanted more.  So I started ‘running’.

But Seriously, I RUN people!!!  The last few weeks I bumped up my routine to 3 miles a day! With the exception of my kickboxing days right now… but these next few weeks I plan to bump it up another notch and change things up a bit.  I expected the physical challenge of running, but never expected the mental challenge that comes with it.  I have had days where just getting from one mailbox to the next jogging down my street was a mental Civil War.  One minute I was telling myself I had to stop because I had to pee, or my ankle was hurting, or my head was pounding, or I couldnt breathe…. then the next my brain was shutting down and all I could focus on was slowing down the heaving breathing…innnnn then oooouuutttt….. and then suddenly I was past that mailbox and moving on to the next and the battle would start all over again.  This last week I have felt more mentally exhausted fighting with myself while running than I have physically… and im running 3 miles every day!!

I have been SO focused on this mental battle of my own that I didnt realize others were watching.  Last week or so I posted a kind of before and after picture just to update the progress I have been making.  It was mostly for my own satisfaction but I was touched and pleasantly surprised by how many others noticed and shared their congratulations and well wishes.  Not only were they praising my hard work but expressing how inspired they were becuase of my daily run posts or photos like these.  It made me stop and think…  I am inspiring others?  Could I be an inspiration to someone else to change their lives the way I did?

The next day I went for a run with the dog. It was incredibly hot and dry out and we faught through it like champs.  I run a 3 mile circle around my neighborhood, sometimes I see familiar faces, but on this particular day I happened to see one gentleman twice on my same run.  You see, I was running one direction and he was going the other on the very same path.  I had never seen him running this neighborhood before, but I could tell he was a good runner. His speed, his form, his fancy runners outfit… heck he wasn’t even out of breath!  Anyway, we did the cordial head nod as we passed each other the first time and I really thought nothing of it.  Later on as I was working my hardest to go up a troublesome hill that marks my halfway point, I slowed to a brisk walk, hands on my hips, desperately trying to calm my chest gasping for air as I made my way up the hill.  Finally right before I got to the top I had slowed my breathing down and Greta nudged the leash to run again, so I picked up the pace and we were off again, jogging at our slow little pace.

Thats when I looked up and noticed my jogger friend from earlier.  He had been steadily jogging at the same pace, still not out of breath, still perfect form, Id say he wasnt even sweating but honestly I didnt notice.  I tried to keep my pace but it was obvious I was fighting to just get to the top of the hill without collapsing from lack of oxygen when suddenly right as he was passing me, he looked me directly in the eyes smiled a warm encouraging smile and gave me two thumbs up.  No words, just two thumbs up and then he was gone jogging away down the evil hill I had reached the top of.  I almost cried.  Heck if the dog hadnt dragged me forward to the next cross street I probably would have.  I was mentally and physically exhausted and one simple hand gesture from a fellow soldier on the road was all it took to boost my enthusiasm. It got me thinking the whole rest of the run about people that inspire me and how I can inspire others with what I am doing.

Two days later I made the terrible decision to run on the track at my kids school because they had running club after school and I had not done my running yet.  I have decided this is going to be pure motivation from now on to get my running done first!  Running on the track was TERRIBLE. (atleast for me, I know some people love it)  I am a visual person, I need to see the next tree or that yellow mailbox, or some kind of visual landmark that tells me where Im at progressively in my run.  On a track, unless you have the metal capacity to count laps AND fight an inner battle with yourself at the same time (which I dont) it is SO exhausting and seems to take forever.   SO anyway, I suffered the self prescribed consequence and began running laps that afternoon while my daughter played on the playground.  There were other kids playing from an afterschool program as well and a few teachers walking around the blacktop.  Later a kids soccer practice showed up and I had to shuffle steps around some of them at times, and feel the stares of the soccer moms sitting in folding chairs right next to my running path as I passed by them.

The burning heat from people starting at me was enough to cause me to try and talk myself out of finishing my run, not to mention my whiny child who didnt want to wait anymore, or my pounding feet or tingly hands or heaving chest… good grief I had plenty of reasons why I couldnt finish… in fact I didnt exactly complete the entire 3 miles that day.  But anyway, as I walked off the track with my daughter a little girl from the playground yelled out to me, “WOW! How many laps did you run!?”  I told her I didn’t know how many laps because I wasnt counting but my phone kept track of how far it was. “How far was it anyway? It had to be like 20 miles!”  Her shock and admiration made me smile. “Nope, only 3.” I replied. Then my daughter chimed in with, “Yeah, she does it EVERY  day!”  The girls giggled together at my percieved silliness and we walked away.

As we turned the corner one of the after school program teachers walked by us and stopped me to say, “That is SO great you do that.  That you get out there and run.”  She continued on to list some very familiar excuses for why she couldnt run herself, but wanted to.  I replied with, “If I can do it, so can you.”  (I have decided since writing this, am going to make a running shirt for me to wear with this quote on it!) I showed her my program On my phone that I started with using intervals and how it slowly builds up and how it tracks ALL the mileage put in up to this point.  It showed that I have run just under 100 miles since September.  She was impressed and inspired to go home and try it out herself.  I walked away feeling frustrated that I had let the excuses get to me and didn’t finish my run but motivated to get out there and do better tomorrow because of who else might be watching.

It is an interesting journey starting out becuase you are inspired by others and ending up being an inspiration yourself… THAT I never would have expected.  So let me ask you, who or what is your “fitspiration”.  Would it motivate you to work harder knowing people are watching you and becoming inspired to change their lives because of the changes you are making in your own health?  It is a silly word, but if it gets people off the couch, off the computer and on their feet then so be it.